About 40 residents at Azahar Place Apartments in Ventura enjoyed a paint night courtesy of two teens with an artist’s knack who donated their time to teach fellow residents ages 3-70 how to paint. 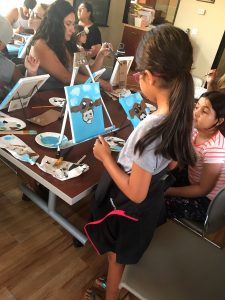 “I was so proud of them for being fearless and taking on the challenge so the event could still happen. I reached out to the two teen-age residents who have expressed a love of art to see if they were willing to take on the challenge. They did, and in a few days put together what they would paint and how they would work together to instruct,” Vignone said.

Jazmin said she had a lot of fun working with fellow residents and helping them learn to paint. “I was a little shy at first, but the people were nice and made me feel comfortable,” she said. Jazmin her love of art has increased since she first started sketching some of her favorite characters, then evolved to other sketching subjects and painting.

William, who attributes his talent to his family, since his grandmother and great grandfather are both artists, said the biggest challenge in putting on the event was trying to find inspiration to know what to paint and speaking to a room full of people.

“It felt amazing to teach a room full of people how to paint because some of the people that were in the room may never get to have the chance to take an art class,” he said.

The paint night event is part of a series of community events that take place each month at Azahar Place Apartments. Inspiration for the events comes from resident requests. Vignone said resident Veronica Garcia, Jazmin’s mother, suggested doing a paint night during a previous Mother’s Day event where residents were creating birdhouse paintings.

“This was our first time organizing and putting on a paint night, and is something we will be doing yearly from now on,” Vignone said.

Vignone said resident Maria Sanchez, grateful for the teens’ instruction, asked if they could teach an art class once a month so everyone at Azahar could become as talented as William and Jazmin.

Vignone said that as a resident manager, it is her goal to connect residents with their local community and with each other, and this was one of the more productive community-building events.

“The teaching aspect alone created confidence in the young teens, gave them an item to put on their resume, and a way to say thank you to all of their community. Paint Night was an immensely beautiful and special event and provided an opportunity for families who cannot afford to purchase tickets to a paint night a chance to have the same experience with their entire family present,” Vignone said.

“The event allowed families to share the community center space and interact with one another. Residents were able to create connections with each other that turn into priceless friendships and support systems, which is exactly what we are aiming for,” she said,